Please contact The Squire at squire@rattlejagmorris.org.uk  with any useful information.

Local people might have noticed over the last few years a new phenomenon namely strangely dressed people with coloured faces dancing to an array of strange sounds and instruments. If you have then it's probably Retford's Rattlejag Morris a new mixed dance side formed at the start of 2002.

Most people think of morris dancing as being done by men in flower bedecked hats and white shirts, and are not aware that there are different types of morris dance. What most people picture are dancers performing 'Cotswold' morris, usually done with either handkerchiefs or sticks; these dances were largely collected at the turn of the century from villages in Oxfordshire and Gloucestershire. In addition there are dances from the Welsh borders -'Border morris'- here the dancers black their faces and dance a much less elaborate dance form but with lots of energy and oomph. Other types are 'North West' from Lancashire and Cheshire and 'Molly' dancing from East Anglia.

Back in February 2002 our small group were busy setting up a new dance side based in Retford. We decided to have a go at researching what type of dance might have taken place in our own area and then to use this as a basis to develop a dance style unique to our region. This coincided with the publication of a book 'Forgotten Morris' by Paul Davenport. Paul had been researching 'lost morris' in Yorkshire and his book contained details of three dances, two from Holderness and one from Snaith near Doncaster. At the same time we discovered an essay written in 1960 by a Mrs Clarke of Ranby who entered an essay competition to write about her childhood memories, writing about the 1880's she wrote....

Mrs Clark (1960), '..the morris dancers gave up over 65 years ago. In the winter months..busy practising for Christmas time when they would visit farm houses... the farmers invited their men and wives to watch. ...morris dancers were always very popular.' We continued our search finding references to dancing in Worksop 'Some stir was occasioned on Monday by the appearance of a company of morris dancers in the streets of Worksop. The dancers went through the old and quaint performance in a very pleasing manner '(Retford and Worksop Guardian 1875)

Another reference from Wheatley 1840 'The lads of South Wheatley used to go all around the neighbourhood dancing in cowhides, horns and all...' (Nottingham Guardian)

Broadening the search we have found references to dancing right across Nottinghamshire and Lincolnshire. It appears that the dancing survived longest in connection with the celebrations that took place on Plough Monday in January. .. .Herring describes a procession of 'morris dancers paraded Caunton and other villages near Newark ..

Washington Irvine visited Newstead in 1835   and described seeing morris dancers alongside the ploughjags who performed the plough play.

'to these succeeded a set of morris-dancers, gaily dressed up with ribands and hawk's bells. In this troop we had Robin Hood and Marian, the latter represented by a smooth- faced boy; also Beelzebub with a broom and accompanied by his wife Bessy a termagant old beldam.'

Lewellyn Jowitt writing about old Notts in 1853 said 'maypoles and morris-dancing were formerly very general'....  'was generally prevalent throughout this county (Notts)'

Numerous references tell us that morris dancers were often in trouble with the authorities. In 1618 dancers were fined for dancing on the Sabbath at Trowell. The dancers came from Wollaton and Bradmore and their pipers from Ruddington and Wysall.

Again in 1844 'the morris dancers amused the good folks of Lincoln with their tomfoolery on Plough Monday and levied contributions on all who were silly enough to part with anything on such a call. The magistrates have forbidden the people to beg and have placed strict injunctions with regard to some of whom may beg from want, why ribbon-bedecked sword carrying buffoons and ruffians should not come within the bounds of the restrictions does not seem plain; they do not beg from necessity, bit for the sake of getting money to spend in riot and excess.

All the evidence suggests that morris dancing was widespread in this area in the seventeenth and eighteenth centuries but began to to become less common after about 1840 so that by 1898 Thomas Radcliffe of Worksop was writing.

'the dear old morris dancers are all dead. At any rate Worksop knows them not. It is some years since the last set of morris dancers performed in Golden-Ball square...' (Retford and Worksop Guardian)

However further north at Snaith and east in Holderness it lingered longer lasting into the 1920's and 30's. 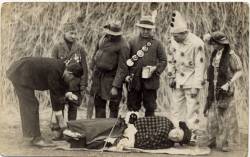 There are references in the early twentieth century to 'morris dancers' in Nottinghamshire but these were almost certainly the local plough players or ploughjags who were often refered to as morris dancers even though the only dancing they might have done was as a comic turn in the play.

Our new Retford group felt confident in using the three dances from Yorkshire as a starting point as all the Notts references suggested a common link with the area further north. Perhaps the most exciting reference we had came from Doncaster...

'The most remarkable modern occasion on which the morris-dance was seen to best advantage ...... was witnessed in Doncaster in 1822. The performers numbered above twenty, male and female. They came from Nottinghamshire. They were fantastically attired in dresses of every variety of colour, with a profusion of ribbons. They belonged to a station in life above that of the artisan and mechanic. They were accompanied by a band of music playing appropriate melodies. A sight so novel excited universal attention.' (Hatfield)

Many of the accounts recorded the costume once worn by the dancers and there is a similarity between them. At Snaith the dance was led by a man wearing a pair of bulls horns, in all the references the dancers disguised themselves by colouring their faces either with soot or coloured clay, the references suggest lots of coloured ribbons flowing from shirts and hats (see our costrume records section). We decided each dancer should choose one colour for their ribbons and face paint which together would give the side a multi­coloured effect. We wear collarless shirts, black trousers and waistcoats which reflect the clothes worn by ploughmen in the nineteenth century. To the waistcoats coloured ribbons are sewn. References from Holderness mentioned the dancers playing or rattling bones during the dances. So we have invested in a range of clickers and shakers (some made out of goats' toe nails!) which give distinct sounds to the different dances. In other dances we use 'flags' or bell sticks with ribbons attached.

Using the material collected as a starting point we have developed new dances and now have a repetoire of over a dozen dances. Our local research (see local morris records section) showed that broom dances were widely danced in Lincolnshire , Ethel Rudkin for example refers to a team of eight  dancing with broomsticks. Rattlejag have now developed three  dances with brooms  and we also have our own baccapipes dance. The local records also describe sword dances being widely done across our area. Again using the recordeed material as a starting point we now have two sword dances which are quite distinctive from those done by other sides. Finally  we have included three dances in our repertoire that were developed by Retford's Broadstone Morris as we feel they are distinctive, were developed locally and add variety to our dance repertoire.

Our musicians at the same time were looking for local tunes which we could fit to the dances. At present we are using the quicksteps from Newark, Louth and Market Rasen. Music is provided by fiddle, melodeon, pipes and hurdy gurdy, supported by a healthy percussion section. We were fortunate in being able to get a lottery grant which enabled us to purchase a set of Leicestershire bagpipes.

Rattlejag has now been in existence for ten years and in that time we have developed our own distinctive repetoire and style. We continue to look for new ideas and sources for new dances. At present we have over twenty dancers and musicians involved with the side. New recruits are always welcome especially anyone who hasn't danced before, it's a great way to keep fit.

We have danced at a wide range of events and festivals and have even made it into TV. If anyone is interested in getting involved, wants to know were we will be dancing next or can throw any further light on the old dances please do get in touch.

This side was founded by Mrs E Giles, the wife of a local millionaire, and at first consisted of Mrs Giles, a few friends, and her employees. The photo was printed in  English Dance & Song (1975, Vol XXXVII No. 1 p29)

Thanks to Dave Rogers for recognising where the photo was from.