This dance was originally taught to some of the side at a workshop in Lincoln run by Liam Robinson who had put the dance together from material collected at Burton Stather. The tune was also collected with the dance. Broom dances were widely danced throughout Lincolnshire.

We were looking for examples of dancers dancing over swords or pipes on the ground and Sam found a dance devised by Charm City Morris in the USA. They very kindly sent us the details of their dance which we have adapted and extended. Thankyou to Charm City Morris for allowing us to use their dance. We feel it fits well with the descriptions of sword dances from our area.

The tune we use is 'Drummond's Fancy' written by our musician Malcolm Smith.

In our archives we have a number of accounts of a dance done using two crossed clay pipes or a crossed fork and poker as at North Muskham and Stixwold. Descriptions describe the dance as being like the baccapipes jig which survived in Oxfordshire. We use simulated clay pipes to make the cross on the floor.

The tune we use is the Lincoln Hornpipe.

In this Dance the dancers use castanettes to make a clicking sound and which has a distinctive cast out and ziz-zag movement. Legend has it that King Lud used to live in Sherwood forest from where he would make forays into the local area to smash the machines that were putting local people out of work.

The tune we use is The Market Rasen Quickstep

This was the first dance developed by Rattlejag. It is our interpretation of one of the dances in ‘Forgotten Morris' collected by Paul Davenport mainly from Mr Alan Foster of Roos. In our version of the dance the dancers use ‘cha cha' shakers made from goats toe nails to make a rattling noise. Roos is in Holderness hence the name.

This dance is based on the second of the two dancrs Clarke's Fancyes collected by Paul Davenport mainly from Alan Foster of Roos. This dance was danced with ‘flags'. Rattlejag use sticks with bells and long ribbons attached. The dance is named after Mrs Clarke from Ranby near Retford who in an essay she wrote about her childhood for a competition described morris dancers from her village dancing at Christmas time in the eighteen nineties.

The tunes we use are The Curly Headed Ploughboy/The Quaker

The film ‘Sleepy Hollow' was based on the book by Washington Irvine. In 1835 Washington Irvine visited Newstead Abbey near Nottingham where he saw morris dancers on plough Monday one of which he described as a ‘termagant old beldam'. This four person dance was developed by Rattlejag in their second practice season.

The tune we use is ‘The Louth Quickstep'.

This dance is developed from material in ‘Forgotten Morris' collected from the village of Snaith near Doncaster. The tune we use is ‘The Blizzard' written by Mats Eden which we first heard in a session at the Blue Bell at Gringley-on-the-Hill.We often perform this dance a ceilidhs with the lights down low using flashing armbands!!!

The tune we use is The Blizzard.

Our local research found that morris dancers would regularly visit Worksop in the C19th where they would dance in the square outside the Golden Ball pub. The tune is a variant of one used by the Oaks and Acorns garland side.

The tune we use is Summer Steps.

We found evidence that broom dancing was once widespread in Lincolnshire. This is a four person dance developed from a single jig using a tradition broom dance tune.

Many sides have a final dance in which members of the audience are invited to join in. Not to be outdone this is usually our final dance.

The tune we use is the Newark Quickstep.

These are three dances which were developed by Broadstone Morris and adopted by Rattlejag. ‘The Turk's Head' is named after the pub to which the side goes after practice. We use sticks with bells and ribbons attached,and is danced to the tune Willow tree played on thebagpipes. The stick dance Castle Hill is named after castle hill at Laxton where Rattlejag dance at sunrise every May 1st. The tunes used  are   The Willow Tree and Enlist for a Sailor.

This dance is danced by eight dancers four carrying besoms and four with brooms. It is danced to the music of a Lincolnshire tune called  'The Congress at Laceby' . There is an account of gangs of youths following the dancers in Lincoln 'shouting and bawling at Moll with the Broom' hence the name Molly Broom.

The tune we use is The Congress at Laceby.

There are many references to sword dancing in our area. Using some of the suggestions from ’The Forgotten Morris’ (P Davenport) we have developed our own sword dance which is deliberately intended to be halfway between a Long Sword dance and a Morris stick dance. Our dance also includes a dancing over the swords move as suggested at Coxbench (Derbyshire). After much experiment we seem to have worked a way in which the different elements fit together and the dance is very much our own interpretation of the evidence available.

The dance is done to a tune written by  Malcolm called  'The Rattlejag March'.

Clog dance: we sometimes include in our performances some step clog dancing (percussive dance performed in wooden-soled shoes and the forerunner of tap dance), as our research has found historical references to it alongside morris dance in rural Lincolnshire and to "hornpipes" being danced in Nottinghamshire, including in Retford and Worksop.  Our dancers perform steps collected from across the north of England.

The tune we use is Old Drove Road.

A new dance for this season using short sticks and a running step Inspired by the discovery that the mining  community at Clee Hill was settled by miners from Nottinghamshire. There was a dance from Clee Hill (thanks to Silurian Border Morrismen) which with its simple movements and rythmic striking seems to fit well with what Rattlejag are doing. No more excuse needed we have developed our own version of the dance which we have named Captain Swing after the Swing Riots that took place in the early nineteenth century.

The tune we use is Dennis Crowther.

In 1851, a gang of forty or so poachers assembled in Rufford Park as a mass action against what was perceived to be the unfair monopolising of game-hunting rights by wealthy landowners. The poachers were attacked by ten gamekeepers and, in the ensuing battle, one of the gamekeepers was badly injured and later died of a fractured skull. Four of the poachers' ringleaders were arrested and each subsequently sentenced to deportation and fourteen years of penal servitude for manslaughter. The incident gave rise to the popular ballad, Rufford Park Poachers  which was collected from the singing of Joseph Taylor  by Percy Grainger in 1908 . Our dance starts with the singing of the chorus from the ballad and the stick striking represents the fight between the poachers and gamekeepers This is a new dance for 2014.

The tune we use is The Gallop to Fulbeck

A new dance for 2017. Developed from a workshop the side held last Autumn. This unique dance is based on the collected material from the village of Snaith. One of the dancers wears a set of cows horns and proceeds to run through the dance at regular intervals.

The tune used is the Sherwood Hornpipe written by Malcolm Smith. 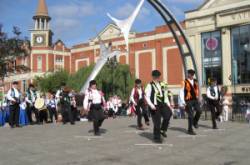